Starting at the Public library (Route de l’Amblève 45 in 4987 Stoumont), cross the road heading for Roua (small tarmacked path by the Cremers household electrical goods shop). Slowly climb into the Roua district by passing behind the Le Fagotin educational farm, before taking on the first difficulty: a beautiful little climb which leads you into the forest, right above the village. At the corner of the little "Ardenne Cabane", chalet, turn left and carry on up to the Spa road (1.25km), that you climb back up over one hundred metres before veering to the left to enter the forest again.

Leave the 7km path route which turns left to continue straight ahead to the ford or over a wooden footbridge). Returning onto the Spa N606 road (KM 2), cross and take a path located between an old quarry on your left and the Nononrui stream on your right. This path, almost forgotten by the people of Stoumont, leads you, between the forest and meadows, straight ahead to the little village of Monthouet. Be careful - this section of the path crosses a private property. We insist on the absolute necessity to use the path with the discretion required to make sure you are quiet for the owners. Please close the gates behind you (risk of game escaping into the garden).

Join the upper part of Monthouet village that you leave through a cleared plot, then through a spruce forest. Once you have arrived onto the plateau which overlooks the commune of Stoumont, continue straight ahead and pass next to Croix Honey (3.75km). Arriving at the large firewall which follows (KM 4), turn 90° left. Carry on straight ahead on the edge of the Life area up to the KM 5.1 and again turn to leave, hearing for the forest.

At KM 5.5, turn right and go back on the N606 tarmacked road. Turn left and continue for around 500 metres on the side of the road before taking a dirt track on the right between the meadows and a conifer wood.

Run on the 21 KM and 30 KM paths which disperse on your right, and continue straight ahead before turning left onto another stony, sloped path which runs along a Fluxys gas pipe. At KM 8.2, dramatically climb to the left in a hairpin onto a forest path that you leave after 500 metres to climb up a single narrow pass which crosses a clearing.
Still continue straight ahead until a stream floods which runs alongside a path. Still straight ahead. Cross the Rau de Targnon and slowly slide into Bois de la Sûreté until another ford.

Turn completely to the right towards KM 9.6 and take on a zigzag descent until you reach the stony path which runs alongside the Fluxys gas pipe, almost at the place where you had started from.

Continue until the RN633 which enters the village of Targnon. Cross carefully (not much visibility) towards the left, then turn immediately to the right to enter the village. First on the left, then still straight ahead to leave the village and join the forest again. Turn left and begin the climb towards Stoumont (wide bend on the right).

The landscape opens up and already the first houses appear (Lodge 7 Hills). Turn right onto a path up to a bench offering a splendid viewpoint over Amblève valley and over the land of Golf Champêtre. Breathe deeply to approach a last nasty slope which lets you access the lower part of Stoumont village. After one hundred meters, go down another little path which winds between the gardens and return to the Public library.

Drinks and food suggested.
Mobile telephone and survival blanket advised.
Be careful crossing the highways.
Respect the property crossed by the path (Monthouet)
Enjoy the picturesque village of Monthouet with its old local stone buildings and sink into the large wooded areas which border Fagne before finding the entrenched bed in Amblève. 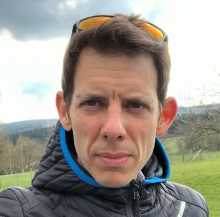