Depart from the Stavelot Tourist Office (glass gallery in the Abbey). Cross the town via Place Saint-Remacle until you reach Avenue du Doyard and Rue Marlennes (note: road N68 has heavy traffic). Continue to climb until you reach a small tunnel (dark and not lit - it may be slippery in winter) through which the Hottonruy (stream) flows. Once you exit the tunnel and cross a small road, continue along with the Hottenruy on your left (right bank) and ascend by passing the Vierge chapel then a small lake on your right. Branch off to the right and enter the forested area in the freshly cleared areas. Climb and reach the summit via a forest road. The gradient eases when you reach a grassy, damp firewall which takes you straight to the top of the plateau. On your right, at the crossroads, note the cross of Saint Ferdinand.

Once you reach the summit, the panorama opens out onto the Roannay Valley and while descending you'll be able to enjoy splendid views of the villages of Moulin du Ruy, Borgoumont and Malchamps fens in the distance to the right. Then follows a pleasant descent through a wood to the village of Roanne below which you'll meet the red route on your left to continue straight until you reach the Roannay (stream). Head towards La Gleize via Les Minières, pass through the village (note the Tiger Royal II number 213 tank abandoned by the German troops at the end of the Second World War and the neighbouring December ’44 museum.

You are then above the village of La Gleize before crossing the hamlet of La Venne via a schistose path which may be slippery in wet weather. The connection to the Stoumont trails begins in La Venne.

Once you have passed La Venne, it is a gentle climb along the Amblève (river) which will take you to the bridge for the Plopsa Coo theme park. Cross the access bridge to Plopsa Coo then head to the far right of the car park, almost to the foot of the waterfall. A very steep and poorly-maintained footpath takes you to the bridge over the Coo waterfall. Above the stone stairs, turn left and follow the car parks located along the road towards the chairlift.

After one hundred metres, take the very steep staircase which will take you along the forested slope of the Coo chairlift. This is a long and very technical climb with plenty of zig-zags. You will climb to a significant height. When you reach the entrance to the chairlift, the climb is far from over but you can enjoy the panoramic view of the village of Coo and its like while taking a breather. The climb continues until you reach the paraglider take-off zone. Here there is also a small area you can use to enjoy the view of Trois-Ponts.

Half a kilometre later, leave the main path to the right to take a path which takes you over the crest. Just before the Ster lookout area (equipped with a picnic table), branch off to the right while the red route goes straight on. Follow the pretty descent in the woods that ends among several houses bordering Chemin de Lancre, just above the Thier de Coo.

By Thier de Coo and the Chemin des Vieux Sarts (holiday village), climb through the forest to a small picnic kiosk. Enter the wood on your right and meet the Croix aux Clous then branch off to the right again to follow a sloped path which forms a hairpin. Incidentally, take in the view of Coo and one of the two arms of the lower lake in the shape of a horseshoe.

An old forest road keeps to the contour which overlooks the RAVel Stavelot-Trois-Ponts 3 km further along the N 68 which you should cross with caution (fast road). Just below some steps, a path starts and weaves to Domaine Long Pré (holiday centre). A metal walkway can be used to cross the Amblève.

After the walkway, turn left, go along the river for a few hundred metres before beginning a steady but significant climb. You'll arrive at a crossroads (KM 21.7); continue straight on. When you reach the first houses in the village of Aisomont, take a sharp left and lose all the height you gained until you reach the Rau de Bouvin which you should follow for a good kilometre. At KM 25.6, there is a right turn over a small wooden bridge situated a little lower.

Head straight on until you reach the Magiru ford and take route de Wanne. Turn right for 100 metres and then left with a lovely ascent along the banks of the Magiru. Reach the summit of the famous Stockeu pass and its marker dedicated to Eddy Merckx then descend on the left along a paved road for approx. 200 metres.

On your right, by the B&B Villa Stavelot, climb towards La Bergerie then Bultay. The area is currently open and you can enjoy a panorama taking in several kilometres. After passing between the pastures then through the woods, cross the hamlet of La Vaux Richard then head towards the walkway (be careful of the routes) over the Amblève.

Just after the walkway, turn right onto a path overlooking the Amblève which will gradually take you up to a group of farms on the outskirts of Wavrumont.

The descent towards Stavelot leaves some time to relax and enjoy the view but the conditions are technical (mud, roots, loose stones, etc). In good weather, you are likely to see some wild rabbits which have dug their burrows even at the edge of the road.

On arrival in Challes, there is one kilometre to go before you get to the Abbey along the Amblève then the playground with its sports fields.

Welcome back! You're back... 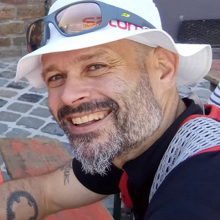